My dear bands and everybody who loves the music scene of the 70s, 80s and 90s on the Los Angeles Sunset Strip,

Vicky Hamilton is a tough lady who has somehow discovered and gave a literal kickstart to artists like Mötley Crüe, Poison, Stryper, Faster Pussycat, Guns N’Roses, and many more. She also worked as an A&R scout for famous Geffen Records and years before this in records stores and as a cocktail waitress in clubs and restaurants. She knows the entertainment business like no one else; recently she added a self-written musical called Glitter Beach to her repertoire.

I had the honor to talk to Vicky and ask her some questions – about her life and her work. Read her answers at the end of the interview and you may find ideas and inspirations on how to work with your own band. Vicky gives examples of best practices and tells what’s important in the music scene today, or how to maybe get a record label deal these days.

If you want to know even more about this crazy world she was living in, you may read her book Appetite For Dysfunction. I wrote a review HERE. My questions were based on that book, but I’ll guess you’ll understand without having read it…

Hello Vicky, how did you feel as a young girl working in a business which is dominated by men? Was there ever any trouble?

I tried to become one of the boys and laughed at the sexual advances. At times things got sticky but I did my best to stay out of the line of fire. I didn’t date my clients for the most part, I tried to keep business, business and playtime playtime.

When you came to Los Angeles you first worked as a waitress. In the movie and musical “Rock of Ages” the same thing happens with the female main character. Was this a common way to get a foot in the door in L.A. or is it just a cliché?

Waitressing is a quick way to make money because you make tips. I was a terrible waitress but when you first move to a new town, it’s a way to pay the rent.

You actually lived in the same building as the Mötley-apartment for a while? How does it look from outside, and are still tourists coming there?

It’s just a regular apartment building in West Hollywood close to the Whisky A Go-Go. I didn’t live there when Mötley did. That building has been a party palace for several decades.

Was your father proud of you later, after he didn’t like the guys you were working with in first place?

My dad came from a strict family. He really never loved that I worked with rock bands.  However, he liked it when I made money working at Geffen Records. So I think he was proud to some degree.

Can you describe why you knew that Mötley, Stryper, GNR, Poison and the others would become big? Was it just a feeling?

I don’t know if I can describe “It”, I just know when I see “it”. It passes my goosebump test.

Are you still doing A&R stuff these days?

I do with my management clients. Also I am thinking of starting up my label Small Hairy Dog again.

Which are the five most important albums in your life?

Did you ever pay money to get a musician out of jail?

With whom of the boys are you still in close contact?

I am still friendly with most of the people I worked with. I try to not burn bridges.

Did you know about the GNR reunion before the public did?

Not really. I think they wanted it to be a surprise for everyone.

What are the most important parts and people of your life today? 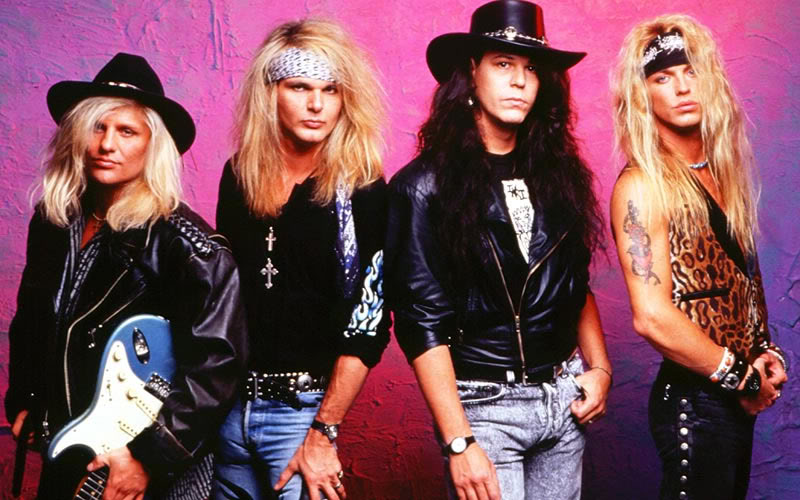 What would you say how a new band should act today? Should they be confident and bold to get deals and bookings, or should they be courteous and humble?

I think it is a balancing act of courage and gratefulness. Have great songs and a plan.

Is it better for the art that most artists are clean today and not taking drugs anymore?

I’m sober for 17 years. I think sober is better but I don’t care if bands want to party…I did when I was young.

Which bands should work with a record label; which bands can get big without one?

Pop bands need a major deal for the most part. It’s expensive to promote and market pop bands. The good news is all bands can build there own careers and business if they work hard at it.

What matters to those record labels? What do they want to see from a band?

Which are the most important parts of such a label deal contract? Are the bands tricked into clauses which are not good for them?

Be care to not commit for 6 albums…the shorter commitment the better. Try and keep creative control.

Bands also often think, the record label or other agencies do all the promotional work. What can they do themselves to help their luck?

What do you think about buy-ons: necessary or a waste of money?

If it is a good tour where you can be seen by like minded fans, it’s worth it.

Did one of your bands ever have to say good-bye to one of their members because he or she was just not good enough? How did they do this?

Happens a lot and is never pleasant. You are only as good as your weakest link.

Can you recommend further books about music business?

Richard Branson has written a few good ones.

What band and which manager are doing a really great job today from which others could still learn a thing?